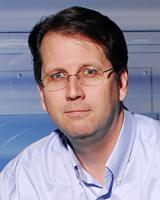 Michael (Mick) West is a senior research engineer at the Georgia Tech Research Institute (GTRI). He is leading efforts to develop an unmanned vehicle that can function autonomously underwater, yet collaborate with other underwater and airborne unmanned vehicles.

Such underwater technology could offer both military and scientific applications, he said. For instance, collaborative underwater vehicles might scrutinize a much larger area for enemy mines than current technology can, or might be able to perform highly complex anti-submarine warfare missions.

In oceanographic research, collaborative vehicles could study underwater movement and phenomena over a broader area and with more detail than current tools.

Unmanned underwater vehicle research is one of several projects in which GTRI is developing autonomous robotic devices. In the Micro Autonomous Systems and Technology (MAST), a multi-year initiative sponsored by the U.S. Army Research Laboratory, GTRI is working with a large number of universities and companies to develop small, intelligent mobile robots capable of collaboration as well as advanced locomotion.

West's research team has developed a prototype of the homogeneous collaborative unmanned underwater vehicle. Its shape is similar to a sonobuoy, a sonar device used for decades for submarine detection. Using the dimensions of a sonobuoy—4 7/8 inches by 36 inches—allows GTRI's new underwater vehicles to fit existing launchers on aircraft and surface vessels.