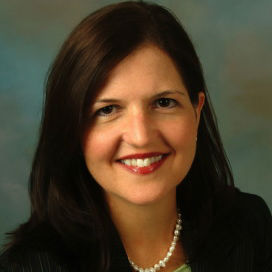 Debra Facktor Lepore is a rocket scientist and “serial entrepreneur,” with over 20 years experience in the aerospace industry, nearly all of which involved start-up projects or companies. In her faculty appointment as Industry Professor at Stevens, Ms. Lepore serves at the executive level to advance and grow Systems Engineering education and research via new programs and projects and is Program Director of Stevens’ inaugural Master’s of Engineering in Technical Leadership program. She works with key industry and government sponsors in the space, aerospace, and defense domains, and facilitates outreach with partner organizations such as the American Institute of Aeronautics and Astronautics (AIAA), Women in Aerospace (WIA), and the International Space University (ISU). Ms. Lepore also serves as Director of Strategic Programs for the Systems Engineering Research Center (SERC), the University Affiliated Research Center (UARC) that Stevens leads for the Department of Defense, with 20 collaborating schools and over 200 researchers around the country.

Her most recent venture was as President and an owner of AirLaunch LLC in Kirkland, Washington. AirLaunch won ~$38 million in funding from the Defense Advanced Research Projects Agency (DARPA) and the U.S. Air Force to develop a small launch vehicle to affordably and responsively deploy small satellites to space from a C-17 cargo airplane. Ms. Lepore led the company’s external activities, including interaction with customers and senior government leaders, as well as development and execution of the company’s business and strategic plans. The team set records for the longest (66 feet) and heaviest (72,000 pounds) objects dropped from a C-17 aircraft and for the longest duration vapor pressurization (VaPak) engine test fire (at 191 seconds). AirLaunch received two patents for innovative airdrop techniques – gravity air drop (from inside an airplane) and trapeze lanyard (t/LAD, for belly launch underneath an airplane). The DARPA/Air Force program, and company operations, concluded in late 2008.

Ms. Lepore’s first commercial venture began in 1997 at Kistler Aerospace Corporation in Kirkland, Washington, developer of the privately-funded K-1 reusable aerospace vehicle. As Vice President of Business Development and Strategic Planning, she identified, developed, and executed new business opportunities, as well as conducted short-term and long-term strategic planning. She was a key player in raising over $600 million private capital and setting the stage for emerging space launch companies to provide innovative services to US government customers. She led Kistler’s unsolicited proposal to NASA in April 1999 for International Space Station (ISS) resupply services and negotiated an innovative commercial contract with NASA, valued at up to $135 million, under the Space Launch Initiative (SLI) Program in 2001. These two activities ultimately begat, nearly 10 years later, what are now NASA’s Commercial Orbital Transportation Services (COTS) and Commercial Resupply Services (CRS) programs.

She began her career as an aerospace engineer working on strategic defense projects at ANSER (Analytic Services, Inc.) in Arlington, Virginia. After the Cold War ended, she served as Chief of Moscow (Russia) Operations for ANSER’s Center for International Aerospace Cooperation and facilitated joint aerospace projects with the former Soviet Union. Over the course of her career, Ms. Lepore has conducted business and interacted with government and commercial entities around the world, including the U.S., Russia, Ukraine, Europe, Japan, Canada, India, Australia, and South Korea. Projects included government and commercial space launch systems, alternative launch concepts, propulsion, human spaceflight, and aerospace technology.

Ms. Lepore is President of the Women in Aerospace (WIA) Foundation, Inc., 2009 Chair of the Board of WIA, and former chair of the Aerospace Industries Association (AIA) Space Council. She is one of the “100 Top Women in Seattle Tech”, one of Puget Sound Business Journal’s 2008 Women of Influence and 2006 “40 Under 40” Awardees, and recipient of WIA’s 2007 International Achievement Award. She is an Associate Fellow of the American Institute of Aeronautics and Astronautics (AIAA); an Academician of the International Academy of Astronautics (IAA) and former Secretary of the IAA Commission on Space Policy, Law and Economics; and an alumna of the International Space University (ISU) 1989 summer session program. She is an appointed member of the U.S. Department of Transportation’s Commercial Transportation Advisory Committee (COMSTAC) and chairs COMSTAC’s Space Transportation Operations Working Group (STOWG).