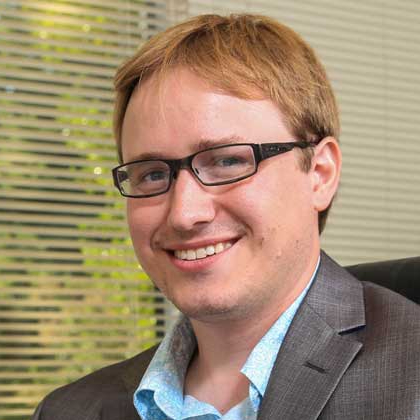 University of Alabama in Huntsville

Dr. Bryan Mesmer joined University of Alabama in Huntsville’s ISEEM Department in 2014. While pursuing degrees at the State University of New York at Buffalo, he worked as a design engineer for Carleton Technologies (Cobham), lending his expertise in the areas of weapons and actuation systems, thermal management systems, and research and development. After completing his post-doc research on large-scale complex engineered systems at Iowa State University, Dr. Mesmer joined UAH College of Engineering as an assistant professor and has continued building upon the end-user modeling research he began as a doctoral student. He has also conducted researcher on ways to measure the exergy of the Space Launch System as part of a NASA grant. "The work we are performing will provide a unique way of characterizing the system," he says. "This will allow the capacity of the Space Launch System to be explored and expanded in the most effective ways in the future."

Dr. Mesmer established the Imagining Engineering Systems (ImagEnS) lab at UAH in 2016 to examine preferences in systems engineering. His research team includes graduate and undergraduate researchers who explore non-traditional disciplines, including the use of gamification in training, the communication of preferences through storytelling, and the study of performance metrics of large-scale engineered systems.