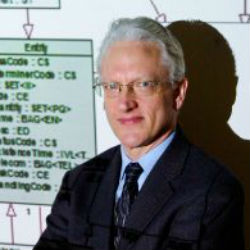 Barry Smith is the creator of Basic Formal Ontology (BFO), which is the most commonly adopted upper-level ontology development framework, now used in over 300 civilian and government ontology initiatives throughout the world. Most recently he has contributed to the AFRL Digital Thread/Digital Twin initiative, whose goal is to develop an ontology-driven analytical framework to allow use and re-use of authoritative data from multiple heterogeneous sources to inform decision-makers throughout a system’s lifecycle.