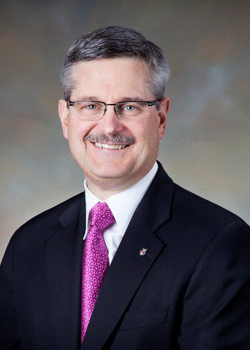 Dr. J. Stephen (Steve) Rottler served as the Deputy Laboratories Director and Executive Vice President, National Security Programs at Sandia National Laboratories from March 2015 to May 2017. In this role, he led the Laboratories’ Nuclear Weapon Program Management Unit and was the Senior Intelligence Executive with responsibility for several national security-related functions. Previously, Dr. Rottler was the Vice President of Sandia’s California laboratory and led the Laboratories’ Energy and Climate Program Management Unit. The California laboratory’s principal programs include nuclear weapons stewardship; homeland security with a focus on defending against weapons of mass destruction; combustion, transportation and hydrogen energy research; biology; and advanced computational and information systems.

Dr. Rottler has held a number of leadership roles in his 30-year career at Sandia, including Chief Technology Officer and Vice President, Science and Technology. In this role, he also managed technology transfer and strategic research relationships with universities, industry, and the State of New Mexico. Within Sandia’s nuclear weapons mission, he was Chief Engineer and Vice President, Weapon Engineering and Product Realization, serving as the Central Technical Authority for nuclear weapons and leading all nuclear weapons engineering and production activities at Sandia. In other leadership roles, Dr. Rottler was responsible for nuclear systems engineering and integration, the development of high-performance electronic systems, and system analyses and assessments for Sandia and National Nuclear Security Administration senior management. He also managed organizations and programs responsible for the research, development, and application of advanced computational and experimental techniques in the engineering sciences. As a member of technical staff at Sandia, Dr. Rottler was part of a research team that developed multidimensional simulation codes for nuclear weapons applications, and he led projects that supported the development of advanced nuclear and conventional weapons concepts.

Dr. Rottler is a Fellow of the American Association for the Advancement of Science. He is also a Fellow of the American Institute of Aeronautics and Astronautics, a member and future-chair of the Institute’s Ethics Committee, a former member of the Institute’s Board of Directors, and a past chair of the Institute’s Technical Committee on Management. Dr. Rottler is a recipient of the Department of the Air Force Award for Exemplary Civilian Service. He is currently serving or has served on the Board of Directors for the United Kingdom Atomic Weapons Establishment, the New Mexico Humanities Council, the Albuquerque Explora Museum, and Technology Ventures Corporation. Dr. Rottler has also served as a member of the External Advisory Board for the Texas A&M University Dwight Look College of Engineering, and he has led or served on independent review panels for other national laboratories, the U.S. Navy Strategic Systems Programs Office, and the United Kingdom Atomic Weapons Establishment.

Dr. Rottler received his B.S., M.S., and Ph.D. degrees in nuclear engineering from Texas A&M University in 1980, 1982, and 1984, respectively. He has published papers, reports, and conference presentations on the development and application of computational radiation-hydrodynamics codes.

Dr. Rottler and his wife have two children. In his spare time, he relaxes through long-distance running, golf, and genealogy. He is also an avid reader of U.S. and English history.