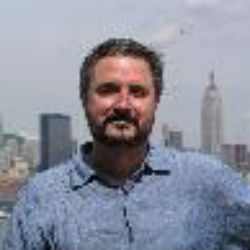 Education:
Research:
General Information:
John Dzielski is a SERC researcher and was employed for almost 21 years at the Applied Research Laboratory at the Pennsylvania State University.  In his final position there he was head of the Unmanned Vehicle Systems Department and directed the development of software for autonomous vehicles as well as being responsible for operation of the vehicles at-sea.  Since 2009, he has been with the Davidson Laboratory at Stevens Institute of Technology. In that position he directs research applying UUVs and acoustic technology to the protection of ports and maritime assets, and research related to UUV operations in estuaries.  He also leads research in supercavitation and the modeling and control of supercavitating vehicles.
In 27 years of working with UUVs John Dzielski has been responsible for developing and validating dynamical models for new and existing undersea vehicles.  He has designed and supervised the implementation of autopilot and navigation algorithms for UUVs, the autonomous mission capabilities that make those vehicles useful, and the distributed real-time simulations of undersea systems that support integration, testing, and simulation-based performance evaluation.  He has worked on numerous UUV programs ranging in size from 20kg to over 8200kg and mission times from minutes to days.  He has been involved in research and development of technology related to supercavitating vehicles and the development of control system concepts for those vehicles since 1995.  Before joining Penn State, he worked at the C. S. Draper Laboratory, where he performed analyses related to spacecraft stability and control.  He has also worked modeling rail vehicle dynamics at the Association of American Railroads in Chicago and with what was then DFVLR in Oberpfaffenhofen, Germany.
Deliverables
Publications