SERC TALKS: “The Practice of Mission Integration: How to focus and synchronize Department of Defense activities towards critical warfighter missions?” 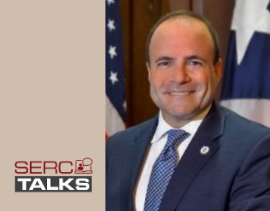 Abstract
This presentation discusses how R&E is addressing the NDAA FY2017 Sec 855 Mission Integration Management (MIM). This will include an overview of Mission Engineering (ME), the technical component of MIM, and current engineering efforts in support of the Joint Staff and modernization priorities. This Talk follows August SERC TALKS: “’Mission Engineering’: Systems of Systems Engineering in Context” with Judith Dahmann, MITRE and our SERC Sponsor Research Review Mission Engineering Panel.
Bio
Mr. Roman joined the Senior Executive Service in August 2020 to serve as the Director for Mission Integration at the Office of the Under Secretary of Defense for Research and Engineering. He returns to the Pentagon after having served as Secretary of State and Lieutenant Governor of the Commonwealth of Puerto Rico since December 2019. Mr. Roman served as the Secretary of the Puerto Rico Department of Public Safety where he was in charge of the Puerto Rico Police Bureau, the Fire Department Corps Bureau, the Forensic Sciences Bureau, the Medical Emergencies Bureau, the Emergency Management and Disaster Administration Bureau, the 9-1-1 Services Bureau, and the Special Investigations Bureau. He was also the Homeland Security Advisor to the Governor of Puerto Rico.

Mr. Roman obtained his degree in Mechanical Engineering at the University of Puerto Rico-Mayaguez Campus, a master’s degree in Systems Engineering from the Virginia Polytechnic Institute and State University (Virginia Tech) and is currently pursuing a doctoral degree in Administration from Colorado Technical University. He graduated from the U.S. Marine Corps (USMC) Recruit Depot in Parris Island, the USMC Officer Candidates School, the US Navy Senior Engineering Duty Officer School the Federal Executive Institute the Defense Acquisition University, and has completed courses in executive development at the John F. Kennedy School of Government at Harvard. After serving in the Marines, he made his transition to the Naval Reserve Engineering Duty program, leading heavy lift salvage support missions worldwide. These include the heavy lift operations of the destroyers USS John S. McCain (DDG 56) and USS Fitzgerald (DDG 62) after the fateful collisions in 2017. Mr. Roman participated in Operation Iraqi Freedom in 2009.

Prior to his confirmation, Mr. Roman was the Director of the Joint Capability Technology Demonstration (JCTD) program and team leader for Mission Integration in the Office of the Under Secretary of Defense for Research and Engineering. Mr. Roman was responsible for providing executive leadership and management of demonstration programs for new advanced defense technologies. He directed the planning and transition of new combat capabilities to the Joint Forces and National Security Agencies within a portfolio worth over $700 million. Mr. Roman is also a CAPTAIN in the U.S. Navy Reserve where he serves as the Commanding Officer of the Office of Naval Research S&T 113 Unit and prior to that he served as the Supervisor of Salvage and Diving Unit and Pillar Lead of the Salvage, Diving, and Explosive Ordnance Disposal Forces of the Naval Sea Systems Command. He served in the U.S. Marine Corps from 1991 to 1997.

Previously, Mr. Roman served from 2010 to 2015 as Oversight Executive of International Cooperation and Asymmetric Warfare programs in the Office of the Under Secretary of Defense for Acquisition, Technology, and Logistics. He was responsible for the implementation of Department of Defense’s efforts in the fight against transnational organized crime; security cooperation, humanitarian assistance/disaster management, and capacity building for allied countries.

Mr. Roman served in a diplomatic assignment from 2005 to 2010 as Regional Director of the Office of Naval Research (ONR) Global at the United States Embassy in Santiago, Chile. While in Chile, he was appointed as Secretary-General of the Specialized Inter- American Naval Conference of Science and Technology and was a member of the Country Team of the United States Embassy in Santiago.

His awards include two US Navy Meritorious Civilian Service Medals, two US Navy Meritorious (Military) Service Medals, and the Chilean Armed Forces Military Star for his work during the response of the category 8.8 earthquake in 2010. He is also the recipient of the United States Navy League RADM William S. Parsons Award for scientific and technical achievement, the General Carl A. Spaatz Award, the 2009 STEM Hispanic Engineer National Achievement Award Conference Luminary Award, a Department of State Meritorious Honor Award and a NASA Technical Achievement Commendation, amongst other military and civil awards.
DOWNLOAD SLIDES

Prior Talks in the Mission Engineering series:

This Talk is free to the public and all are welcomed to join and participate in this open discussion. The recording of this Talk will be available on the SERC YouTube channel a few days following the event. Those whom have subscribe to the SERC YouTube channel or registered for the Talk will receive the announcement regarding this release. If you have any questions regarding joining this session, please contact the SERC Talks webinar coordinator, Ms. Mimi Marcus. If you would like to present in a future SERC Talk, please contact our SERC Talks Editor-in-Chief and SERC Research Council Chair, Dr. Barry Boehm.