SERC TALKS: “What Does Test & Evaluation Mean in a Digital Engineering Enabled World?” 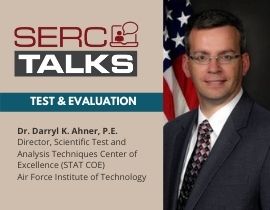 Abstract
Testing has often been looked at as a (un)necessary evil. In order for testing to be value added, it must not take too much time, provide quality information, and provide timely information to appropriate affect systems engineering and acquisition decisions. In this talk we will discuss the demand for testing events, the Scientific Test and Analysis Techniques process (since STAT is mandated in DoD policy anyway), and what test planning may look like in a digital engineering environment. Examples of efficient and effective test planning will also be discussed, both those that were conducted during development and those developed post deployment.
Bio
Dr. Darryl K. Ahner, P.E. is the Director, Scientific Test and Analysis Techniques Center of Excellence (STAT COE) and was instrumental in shaping its graduate-level test engineering operational concept leading to its establishment by the Office of the Secretary of Defense in 2012. He is also a Professor of Operations Research, Program and Curriculum Chair of the Data Analytics and Data Science programs, and Director of the Center for Operational Analysis at the Air Force Institute of Technology. As Director of the STAT COE, he is responsible for executing the Center's mission to provide independent advice and assistance to designated major acquisition programs in the application of scientific test and analysis techniques for test planning and the resulting data analytics. The Center also conducts externally funded applied STAT research, provides STAT education, and develops best practices and case studies in the employment of STAT. Dr. Ahner is a licensed Professional Engineer. He has written over 50 technical articles, made over 70 technical presentations, and has led several technical working groups. He has been a faculty member at the Air Force Institute of Technology (AFIT) since 2010, where his research emphasizes optimization of test & evaluation, autonomous systems, big data analytics, reliability, stochastic models, simulation, and military operations research applications. Prior to AFIT, he taught for five years at the United States Military Academy at West Point and served for three years as the research director for an Army analysis center at the Naval Postgraduate School. In addition to being a member of the Institute for Operations Research and the Management Sciences (INFORMS), and International Test and Evaluation Association (ITEA), Dr. Ahner has been an active member of the Military Operations Research Society (MORS), most recently serving as Vice President for Professional Development and Vice President (Secretary of the Society) on the Executive Committee. A 1990 graduate of the United States Military Academy at West Point, Dr. Ahner retired from the US Army in 2012. During this time he was awarded the Legion of Merit, an award usually reserved for general officers and a Special Act Award for leading modeling, simulation, and analytic research efforts. His academic studies include Rensselaer Polytechnic Institute, where he earned a M.S. in applied mathematics and a M.S. in operations research and statistics, and Boston University where he earned his doctoral degree in systems engineering while a Charles Stark Draper Laboratory Fellow. Dr. Ahner’s awards include the 2020 Colonel Charles A. Stone Award in recognition of an individual who has made outstanding contributions to furthering the AFIT mission, member of the 2019 U.S. Air Force Analysis Team of the Year Honorable Mention, 2018 Journal of Defense Analytics and Logistics Best Paper for “Finding the Fuel of the Arab Spring Fire: A Historical Data Analysis,“ the 2016 Richard H. Barchi Prize for the best paper given at the Military Operations Research Symposium for “Suitability Analysis of Continuous-Use Reliability Growth Projection Models”, the 2017 Affiliate Society Council of Dayton Outstanding Engineers & Scientists Award, the 2014 E. Grosvenor Plowman Award for Best Paper at Council of Supply Chain Management Professionals Global Conference for "Exploring the Use of the Upper-Semi Variance as a Robust Estimator For Calculating Safety Stocks," the 2012 Colonel Charles A. Stone Award, a 2008 Special Act Award including a $5000 Cash Award presented by a 4-star general in recognition of meritorious scientific achievement, and the 2007 Wilbur B. Payne Award in recognition of the best Army analytical technical study.

More information on all SERC Talks can be found here. Thank you!

NOTE TO PARTICIPANTS: SERC Talks broadcasts is now using the Zoom for Government Webinar platform. Prior to the SERC Talk, we encourage all participants to install and test the platform to exercise full virtual capabilities. Installation is NOT required to join the session, as Zoom is accessible via web browser.

More information on all SERC Talks can be found here. Thank you!