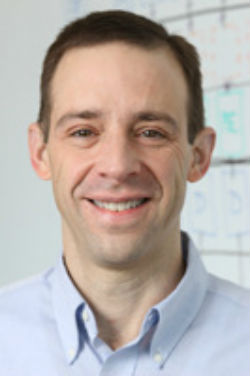 Kevin Skadron has been on the faculty at University of Virginia since 1999. He received his B.S. in Electrical and Computer Engineering and B.A. in Economics from Rice University in 1994, and his Ph.D. in Computer Science from Princeton University in 1999. He spent the 2007-08 academic year on sabbatical at NVIDIA Research. He became department chair in 2012. He also helped found and serves as director for the U.Va. Center for Automata Processing (CAP).
Skadron is the recipient of the 2011 ACM SIGARCH Maurice Wilkes Award and a Fellow of the IEEE and ACM.  For the year 2003-04, he was named a University of Virginia Teaching Fellow.  Among other professional activities, he is co-founder and editorial board member of  IEEE Computer Architecture Letters, for which he served as associate editor-in-chief from 2001-2009 and editor-in-chief from 2010-2012.  He has served on the editorial board of IEEE Microfrom 2004-2012 and as co-founder/co-editor (with Kevin Rudd) of its “Prolegomena” column, as secretary-treasurer of ACM’s SIGARCH from 2007-2011, as technical program co-chair of PACT 2006, general co-chair for PACT 2002and MICRO-37,  and on numerous technical program committees. He has also given several keynotes; most recently, he presented the keynote for IISWC 2014.
Areas of Interest:
Deliverables
Publications