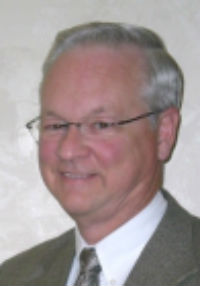 Missouri University of Science and Technology

Dr. Pape was born in Chicago, IL. He graduated in May 1970 from the US Air Force Academy as a lieutenant in the USAF with a BS in Physics. He earned an MS in Optical Sciences at the University of Arizona in February 1972. He conducted laser propagation and atmospheric turbulence experiments in wind tunnels and on aircraft until 1976, when he served as Assistant Program Element Monitor (PEM) on the Global Positioning System (GPS), and Acting PEM for USAF Basic Research, assigned to the Pentagon. He managed GPS Satellite contract financials for four years at Space and Missile Systems Organization. He left active duty in 1980, but remained in the AF Reserve, retiring as a Colonel in 2000, having served in acquisition, logistics, training, testing and safety positions.

After leaving the USAF he worked for TRW in Redondo Beach, CA on satellite laser communication systems. In 1994 he joined Boeing to work on aircraft systems engineering and networked systems independent research and development. In 2009 he was selected as a Boeing Associate Technical Fellow in Systems Engineering. He teaches in the Boeing Systems Engineering Leadership Program.

In other education, he earned an MBA in 1980 from California State University, Dominguez Hills. He graduated from Air Command and Staff College (1978), Industrial College of the Armed Forces (1986), and Air War College (1996).

Dr. Pape is a member of INCOSE (an officer in the Midwest Gateway chapter) and the IEEE. He is a Certified Systems Engineering Professional (CSEP) since 2011. In 2013 he was the winner of the INCOSE/Stevens Institute Doctoral Award for Research most likely to impact Systems Engineering in the next 10 years. He has been a mentor for FIRST Robotics teams and student project teams in the Missouri S&T 'Introduction to SE' course for several years.