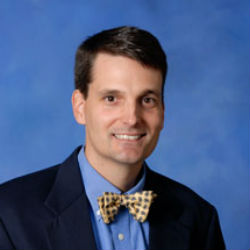 University of Alabama in Huntsville

Dr. Colley received his Ph.D. in astrophysical sciences from Princeton University in 1998. During his graduate work, Dr. Colley focused on gravitational lensing and cosmology. His team at Princeton monitored the brightness fluctuations of particular lensed-quasar system that allowed them to settle a decades-old controversy over the implied value of the Hubble Constant, which sets the size scale for the Universe. He used Hubble Space Telescope imaging of a gravitationally lensed-cluster system, to measure the mass of the very distant cluster of galaxies, and exploit the lens's magnification to realize Einstein’s dream of a “gravitational telescope” in which the gravity of a foreground celestial body forms enhances our view of very distant background objects.

Dr. Colley spent 1998–2000 as a post-doctoral fellow at the Harvard-Smithsonian Center for Astrophysics. He continued his work in gravitational lensing, focusing on very rapid brightness fluctuations in a quasar lens system that would indicate the presence of planetary mass dark matter in the lens galaxy. Detection of such fluctuations, however, required dedicated monitoring around the clock during two campaigns of 10 days each. Colley and a colleague, therefore, formed a collaboration of 13 observatories around the world, including sites in Korea, Ukraine, Israel, Spain, Mexico, Canada and Arizona. Colley developed a highly automated software system to process the thousands of images collected, and achieved 1% precision in the quasar brightness measurements with continuous hourly sampling. The effort produced the first-ever sub-day time-delay for a lens system. The resulting refinement allowed Colley to discover a very rapid fluctuation in a previous dataset that suggests the presence of an earth-mass object in the lens galaxy (which is halfway across the Universe); this is possibly a detection of an extra-galactic planet.

Dr. Colley then moved to the Space Control Group of M.I.T.'s Lincoln Laboratory as a technical research staff member. His research focused on the Space-Based Infrared System (SBIRS). This system would field a constellation of low-earth orbit mid-infrared satellites that would observe a missile from the end of the boost phase throughout the mid-course, including deployment of re-entry vehicles and decoys. The system would determine orbits for each object (r.v. or decoy) for hand-off to ground-based radar and interceptors. Dr. Colley's work focused on inter-platform object identification to build a unified target object map, for handoff to ground radar and interceptor systems.

Dr. Colley returned to astrophysics as a lecturer at the University of Virginia, where he continued his work on gravitational lensing by developing models to help understand the rapid brightness fluctuations mentioned above, and by developing dramatically faster simulations of gravitational lensing that could test these models against observation. He also quantified the shapes of large-scale structures seen in the cosmic microwave background as seen by the Wilkinson Microwave Anisotropy Probe (showing consistency with the Inflationary prediction of Gaussian random-phase quantum fluctuations).

Colley first became involved in formal modeling and simulation (M&S) at the Virginia Modeling, Analysis and Simulation Center (VMASC) at Old Dominion University. There he worked under Homeland Security funding to model mass casualty events in urban environments. A massively parallel agent architecture was used to estimate the load on medical infrastructure during the aftermath of such an event. In separate work, he helped develop a formal validation methodology for large operational training simulations under Naval Commander Operational Test and Evaluation Force (ComOpTEvFor). Colley traveled to Camp Smith in Hawaii, and Eglin Air Force Base with students to test the method in support of the Terminal Fury ’05 exercise.

The Center for Modeling, Simulation and Analysis at the University of Alabama in Huntsville came on line in 2005. Colley joined the new team and began work immediately with NASA to enhance Marshall Space Flight Center’s M&S capabilities in support of systems engineering for the upcoming lunar missions. Colley is currently working with students to federate current stand-alone tools at MSFC into a large distributed simulation that includes high-fidelity propulsion, aerodynamics, electrical and structural models, as well as high-end visualization tools and virtual environments. Under the Army’s Aviation and Missile Command, Colley has used discrete event simulation techniques to develop custom software that will help optimize inventory stocking strategies for aviation parts in Southeast Asia. He will shortly begin work with the Naval Air Warfare Center on validation methodologies for Netcentric Warfare Test and Evaluation tools.