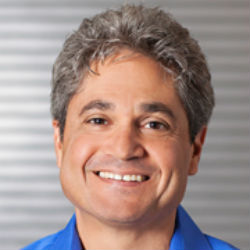 Mark Bolas is a researcher exploring perception, agency and intelligence. His work focuses on creating virtual environments and transducers that fully engage one’s perception and cognition and create a visceral memory of the experience. He is the associate director for mixed reality research and development at ICT. He is also an associate professor of interactive media in the Interactive Media Division of the USC School of Cinematic Arts. In addition he is the chairman of Fakespace Labs in Mountain View, California, which Bolas co-founded to build instrumentation for research labs to explore virtual reality. He has been a professor at Stanford University and Keio University, exploring tangible interfaces, augmented reality and computational illumination. These projects have explored context sensitive audio interfaces, socially interactive toys, augmented reality, confocal illumination and mobile phone web logging. His work has been exhibited in many venues including six Emerging Technology exhibits at SIGGRAPH, starting in 1991 with Flatlands, which used the illusion of perspective to transform a sculpture into Mondrian’s Composition with Line, 1918; the music-driven worlds of Vacuii and StillLife created with Christian Greuel and Niko Bolas; and the invisibly structured Snared Illumination created with Perry Hoberman and Ian McDowall. Bolas majored in physics and minored in music at University of California, San Diego. He holds an M.S. in mechanical engineering from Stanford University. His 1988-89 thesis work “Design and Virtual Environments” was done under the direction of Rolf Faste in Stanford’s design program and Scott Fisher at NASA Ames Research Center. It was among the first efforts to map the breadth of virtual reality as a new medium. This effort led Bolas toward a basic model for immersive experience design, concluding that the medium’s power to deeply transport a user is closely tied to finding an appropriate balance between realism and abstraction.