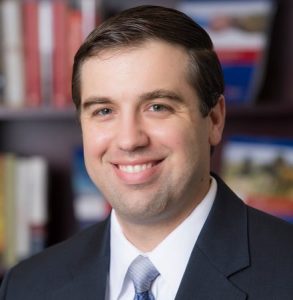 Paul Scharre has been invited to speak at the 2018 SERC Sponsor Research Review on November 8 in Washington, DC.

Paul is a Senior Fellow and Director of the Technology and National Security Program at the Center for a New American Security. He is author of Army of None: Autonomous Weapons and the Future of War.

From 2008-2013, Mr. Scharre worked in the Office of the Secretary of Defense (OSD) where he played a leading role in establishing policies on unmanned and autonomous systems and emerging weapons technologies. Mr. Scharre led the DoD working group that drafted DoD Directive 3000.09, establishing the Department’s policies on autonomy in weapon systems. Mr. Scharre also led DoD efforts to establish policies on intelligence, surveillance, and reconnaissance (ISR) programs and directed energy technologies. Mr. Scharre was involved in the drafting of policy guidance in the 2012 Defense Strategic Guidance, 2010 Quadrennial Defense Review, and Secretary-level planning guidance. His most recent position was SpecialAssistant to the Under Secretary of Defense for Policy.

Prior to joining OSD, Mr. Scharre served as a special operations reconnaissance team leader in the Army’s 3rd Ranger Battalion and completed multiple tours to Iraq and Afghanistan. He is a graduate of the Army’s Airborne, Ranger, and Sniper Schools and Honor Graduate of the 75th Ranger Regiment’s Ranger Indoctrination Program.

Mr. Scharre has published articles in The New York Times, Wall Street Journal, CNN, TIME, Foreign Policy, Foreign Affairs, Politico, and The National Interest, and has appeared on CNN, MSNBC, Fox News, NPR, and the BCC.  He has testified before the House and Senate Armed Services Committees and has presented at the United Nations, NATO, the Pentagon, the CIA, and other national security venues. Mr. Scharre is a term member of the Council on Foreign Relations. He holds an M.A. in Political Economy and Public Policy and a B.S. in Physics, cum laude, both from Washington University in St. Louis.